You could have the most astounding video content, in high resolution and with amazing quality, enhanced with all sorts of special effects and advanced graphical filters – it doesn’t matters if you aren’t capable of delivering it to your consumers. Their connection speed is often limited and they might not have enough bandwidth to receive all these megabytes filled with rich multimedia data. While our networks are improving at an astonishing rate, they’re still the main bottleneck of many systems, as the size of the files rises rapidly with better resolutions and bitrates. While you can add several more cores to your servers to increase their computing power, you’re not able to alter the Internet infrastructure of your users. You have to choose – send them high definition data or sacrifice the quality to make sure the experience is smooth.

The most obvious solution is to prepare several versions of the same video and deliver one of them depending on user bandwidth. In the past this was a standard approach, once the choice was made, files were streamed in a progressive way, from the beginning till the end, just like images in modern web browsers.

This method has several disadvantages. The biggest one – you cannot dynamically switch between versions in the middle of the sending process in order to react to changes in the network load. If the connection improves you can’t take advantage of it and you have to continue sending worse quality despite having resources available. Even worse, you can’t prevent congestion if the transmission speed decreases – you either cancel the entire process or end up with the video becoming laggy. With continuous streaming you also can’t just skip part of the multimedia and jump ahead until the downloading process gets to the desired moment neither can you rewind data quickly.

To fix these issues better a more flexible solution is needed. For a long time the preferred choice was Adobe RTMP (Real-Time Messaging Protocol) used together with Adobe FMS (Flash Media Server). It was complex and became problematic in the era of mobile devices, since their support for Flash based technologies is pretty average. This allowed HTTP based protocols to emerge and dominate the market.

These technologies split video and audio into smaller segments which are encoded with different bitrates. It allows to dynamically choose optimized data based on current connection speed and CPU. It’s called adaptive bitrate streaming.

HTTP has a number of advantages compared to RTMP

As of now there is no single, standard HTTP-based protocol, instead there are several implementations by different vendors. One of them, Apple’s HLS, was available in Panda for a long time. Now we’re adding another one – HSS (HTTP Smooth Streaming), a Microsoft technology which allows the use of adaptive bitrate streaming features in Silverlight applications. Even though that with the advent of HTML5 Silverlight is not as popular as it used to be (over 50% market penetration in 2011) it’s still a widely spread, common technology and a noteworthy rival of Flash.

To use HSS specialized server is needed. The most obvious choice would be Microsoft’s IIS but there are modules for Nginx, Apache Httpd and Lighttpd as well. After setting it up, together with a Silverlight player, you need to split your video files into data segments (files with .ismv extension) and generate manifest files (.ism and .ismc extensions), which are used to inform receivers what kind of content the server can deliver.

This is where Panda comes in handy as a convenient encoding tool. All you have to do is add HSS preset to your set of profiles and configure it as needed to get a pack of converted files ready to deploy. The most important setting is an output file format. With a default ‘.tar’ extension you will receive at the end of the encoding process a single, uncompressed archive which contains all necessary data. All that’s left is to unpack this archive into the selected folder of your video server and then provide your Silverlight player with a proper link to a manifest file. You can alternatively choose ‘.ism’ format, which won’t archive the output. Instead files will only be sent to your cloud, from where you can use them any way you need. 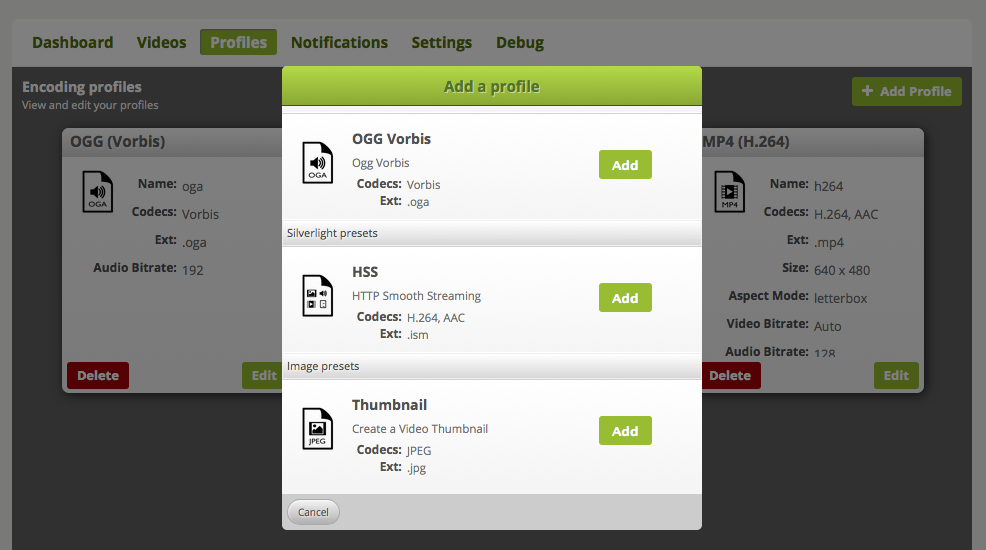 Another important thing to consider is a video bitrate value for your segments. The default settings produce segments with bitrates of 2400k, 600k, 300k and 120k. If you insert custom value, your output will consist of segments having a bitrate equal to the provided value, 1/2, 1/4 and 1/8 of it. Finally, you might alter the standard set of options such as resolution and aspect ratio.

Now you can have the benefits of adaptive bitrate streaming if your business uses Microsoft technologies. All you have to worry about is content quality, since the problems with delivery are becoming less of a burden, all thanks to the abilities of HTTP protocol.